112 reasons (and counting!) Hillary Clinton should be our next president

America will choose a direction for our country on issues from gun violence prevention to women’s rights to building an economy that helps the middle class get ahead—and stay ahead.

In 2016, we won’t just choose our next president. America will choose a direction for our country on issues from gun violence prevention to women’s rights to building an economy that helps the middle class get ahead—and stay ahead.

Hillary has proved she’s the candidate who can take on tough fights and get things done. But that’s not the only reason she should be our next president. Here are the first 112 reasons (and counting) that Hillary should be president.

1 - As a former secretary of state, U.S. senator, first lady, and a lifelong advocate for women and families, no one is more qualified to be president than Hillary. 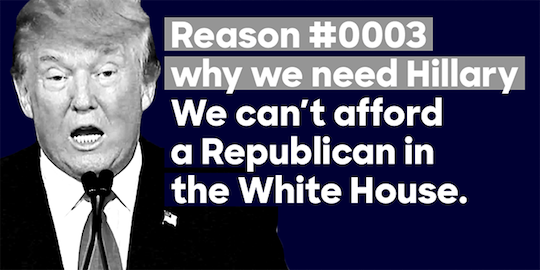 4 - Our democracy should work for everyone—not just the wealthy and well-connected.

5 - Our next president could make multiple appointments to the Supreme Court.

7 - She’ll fight to overturn Citizens United to curb the outsized influence of big money in politics.

8 - Because the wealthiest should pay their fair share in taxes.

9 - We need comprehensive immigration reform that includes a path to full and equal citizenship.

10 - She’s set a big goal: More than half a billion solar panels installed across the country by the end of her first term.

11 - She’s set another big goal: To generate enough renewable energy to power every home in America within 10 years of her taking office.

12 - The economy is stronger when a Democrat is in the White House.

14 - Hillary’s New College Compact would mean students would never have to borrow to pay for tuition to attend a four-year public college in their state—and the millions of Americans who have student debt can refinance.

15 - Because taxpayers shouldn’t pay for millionaires’ and billionaires’ kids to go to college.

17 - She declared on the world stage that “gay rights are human rights.”

18 - Experts say Hillary’s plan to keep Wall Street accountable is the toughest of all Democratic candidates.

19 - As first lady, she helped get health care coverage for 8 million American children.

20 - Our veterans should have access to timely and high quality health care.

21 - She’s the only Democrat with hedge-fund billionaires running ads against her—because they know her agenda is to stop their agenda.

22 - After decades of fighting for progressive issues (and 11 straight hours of testimony in front of a Republican-led congressional committee), she’s proved nobody can stand up to Republicans better than she can.

23 - Hillary believes that raising middle-class incomes is the defining economic challenge of our time—and she has a plan to do just that.

24 - Suspected terrorists, domestic abusers, other violent criminals, and the severely mentally ill shouldn’t be able to purchase a gun.

25 - Because every 4-year-old in America should be able to go to a high-quality preschool in the next 10 years.

26 - We need to invest in infrastructure and rebuild or expand our roads, bridges, rail, broadband, public transit, and water and energy infrastructure.

27 - We need to protect Americans’ right to vote—not billionaires’ and corporations’ right to buy elections.

28 - Have you seen the Republican debates?

29 - Hillary will work to keep families together and defend President Obama’s executive actions that protect DREAMers.

30 - She has spent her life fighting for a fairer America.

31 - She’s been fighting for women and children her entire career—ever since she started working at the Children’s Defense Fund after law school.

32 - She believes we need a new and comprehensive commitment to equity and opportunity for communities of color.

33 - She’ll empower veterans and strengthen our economy and communities by connecting their unique skills to the jobs of the future.

36 - Community college should be tuition-free for every American.

37 - It's time to close the Charleston loophole that lets otherwise prohibited individuals buy a gun if their background check is not complete in three days. 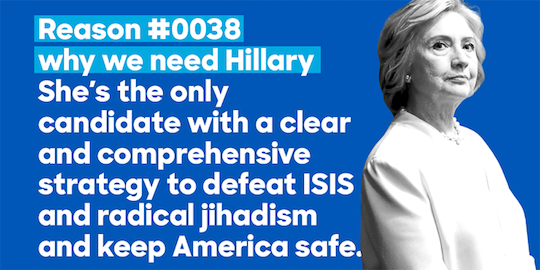 39 - Hillary negotiated a ceasefire between Israel and Hamas that ended the rain of rockets on Israel.

40 - Smart power is a smart strategy.

41 - We need a president who will crack down on companies that send profits overseas to avoid paying their fair share.

43 - We need a president with a plan to protect the transgender community from violence.

44 - If Congress continues its refusal to act on comprehensive immigration reform, Hillary has a plan to act—and do everything possible under the law to protect families.

45 - She knows how to find common ground to get the job done—but also how to stand her ground.

46 - Hillary is prepared to tackle all challenges, including national security—because presidents don’t get to choose which issues come to their desks.

47 - She has a plan to reform mandatory minimum sentencing.

48 - We need a small-business president.

49 - Because every American citizen should be automatically registered to vote when they turn 18, unless they opt out. Hillary will get it done. 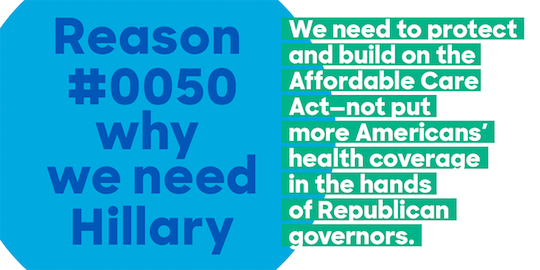 53 - Hillary has a plan to reduce the risk of future financial crises.

54 - Because we should hold corporations and individuals on Wall Street accountable—and prosecute them when they break the law.

56 - She fought for health care for 9/11 first responders as a U.S. senator—and she’s been a vocal advocate for a permanent renewal of the Zadroga Act.

58 - The Affordable Care Act is working—but you could still use a lower co-pay and deductible.

59 - Hillary will defend and fight to restore collective bargaining rights for workers.

60 - She knows historically black colleges and universities (HBCUs) serve an important public mission and will make a significant commitment to them.

61 - We need to end the sentencing disparity between crack and powder cocaine. 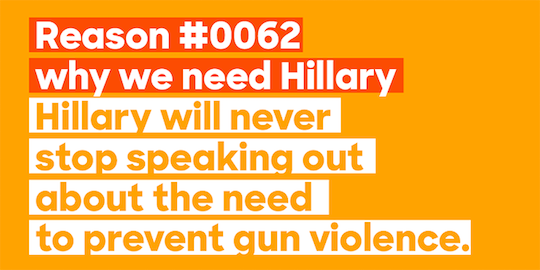 63 - Because it’s time to end conversion "therapy" for LGBT minors.

64 - Hillary will put a stop to Republicans’ systematic efforts to stop millions of people from voting.

65 - We need a president who will fight to restore the protections of the Voting Rights Act after they were gutted by the Supreme Court.

66 - Hillary helped negotiate the toughest sanctions Iran has ever faced.

67 - She’s earned the wrath of the gun lobby, Iran, pharmaceutical companies, and special interests—and that should tell you something about who she’s fighting for.

70 - She believes we should let families buy into the Affordable Care Act health care exchanges regardless of immigration status.

71 - Prison is not a substitute for treatment for drug addiction and mental health issues—Hillary knows that and will do something about it.

72 - We can create a new national standard of no fewer than 20 days of early in-person voting in every state.

73 - Because those at the top are doing just fine. It’s your family who needs a fighter in the White House. 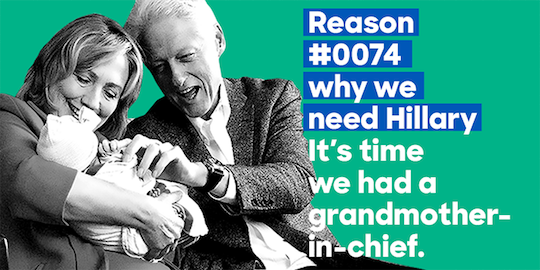 75 - Hillary has a plan to combat America’s deadly epidemic of drug and alcohol addiction.

76 - In the words of former Secretary of State Madeleine Albright: “I’ve never met anyone more prepared to be president.”

77 - She has a plan to make our financial system fairer and more accountable.

78 - High-quality K–12 education needs to be a priority for every child in America.

80 - She made LGBT rights a priority of U.S. foreign policy.

81 - In the words of the Advocate, Hillary has an “awesome LGBT agenda” to protect and expand LGBT rights.

82 - She’s not afraid to stand up to discriminatory attempts to roll back voting rights in places like Alabama.

83 - Hillary knows Muslim Americans are helping our communities succeed and are our first, last, and best line of defense against radical jihadism.

84 - Unlike the Republicans, Hillary will defend marriage equality nationwide.

85 - She will provide funding to make sure body cameras are available to every police department in America to increase accountability on both sides of the lens.

88 - The NRA has never helped Hillary get elected.

89 - Her first major address as a presidential candidate was a call to end the “era of mass incarceration.”

92 - She worked to expand the Family Medical Leave Act, allowing families of those wounded in service to their country to take leave in order to care for their loved ones. 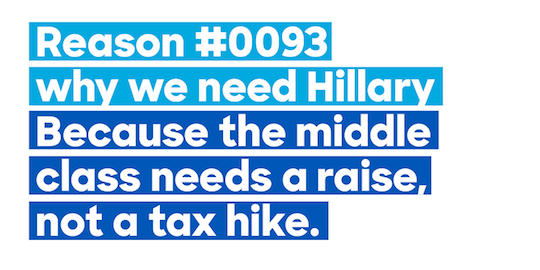 94 - Family members who care for ailing parents and grandparents could use some tax relief.

95 - She has called out the Republicans’ offensive, inflammatory anti-Muslim rhetoric because she knows it’s against our values as Americans—and our national security.

96 - Because when a company does well, the employees who helped produce those profits deserve a share in them—not just CEOs.

97 - She believes we should use alternatives to incarceration for low-level, nonviolent marijuana users, and she will reschedule marijuana from a Schedule I to a Schedule II substance.

98 - She’s not afraid to to call out Republicans for blocking efforts to keep guns from suspected terrorists.

99 - She helped lead the charge to raise the minimum wage as a senator.

100 - Building international coalitions advances our values, interests, and makes the world safer. Hillary is the only candidate who’s actually done it.

101 - She worked across the aisle to expand health care access for members of the National Guard and reservists—making sure those who served and their families had access to health care when they returned home.

102 - We should put American families over the gun lobby—and Hillary is not afraid to stand up to the NRA.

103 - There are cities across the country that are already leading on climate change—so she’ll launch a Clean Energy Challenge that will form new partnerships with states, cities, and rural communities.

104 - She’ll “ban the box” so people who have a past conviction can get a fair shot at employment.

106 - Businesses should be encouraged to train and hire apprentices.

107 - The nation’s leading advocates for gun violence prevention have said Hillary’s plan is the right strategy.

108 - Because women’s rights are human rights.

109 - Because even when people didn’t want her to go to China and stand up for human rights at the 1995 U.N. Conference on Women in Beijing, she did it anyway. 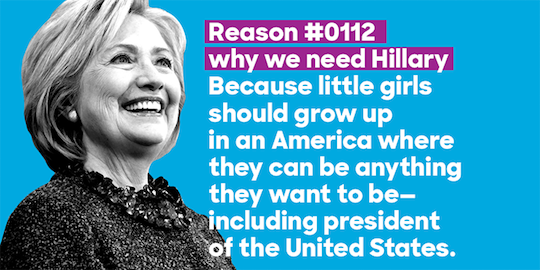 112 reasons (and counting!) Hillary Clinton should be our next president
Comentarios